On Tisha Ba’av we mourn the loss of the Beis Hamikdash (Holy Temple) that was destroyed thousands of years ago, but in reality we are mourning all the subsequent losses that came as the result.
And our understanding is that history doesn’t just happen. We are partners in creating it. In some way, the Jewish exile, the wandering from country to country, the antisemitism, and even global events are within our circle of influence.
The Holy Temple was destroyed because of sinas chinam – baseless hatred. The Temple was G-d’s home, where His presence rested. It was our home, where we came to serve Him, to bask in His closeness. It gave us purpose and direction; it gave us unity and honor.
Somehow within that, we lost our direction. We had this beautiful structure, we were pampered with the music and rituals of the Beis Hamikdash and we lost our way. We forgot that it was about unity and we thought it was about religion. We forgot that it was about G-d and we thought that it was about society.
G-d is One. Society is pieces. It’s a fractured mess of sections and subsections where people try to find their place by carving out a line between us and them. It’s a search for identity beyond the only identity that matters; that we are all (the whole world) children of Hashem and that the Jewish people is a family.

On Tisha Ba’av we mourn. We sit on the floor. We don’t eat, we don’t drink, we don’t bathe, we sleep without pillows and we think. We think about what we lost and why. We think about how to fix it and how to fix the world.
Sometimes people say, I can’t mourn over the Beis Hamikdash, it seems so far away. I want to feel Tisha Ba’av, but I just can’t. This is normal. G-d understands the limits of our imagination. He understands that we cannot mourn what we haven’t felt.
What He’s asking us is this: look at the world and miss ME. Miss seeing me in the perfect Jerusalem sky, that is now clouded with memories of blood and war. Miss me when you meet a fellow Jew and instead of acknowledging your shared memories and ties, you walk right past them. Miss me in the faces of children that are being hurt and in adults who are lonely beyond belief. Miss my presence. Yearn for me to return to your midst.
Be brave, be vulnerable. On all other days, go about the business of fixing the world; toil hard, do good deeds. But on this day, remove that tough shell that lets you listen to news that broadcasts killings and rapings. Remove the tough shell that lets you ignore the brokenness and misunderstandings. Be soft, be open; FEEL.
In that feeling is unity. We are all in the same exile. We all share one G-d. We are all one family. We all want better things for this world. It’s a simple thing; this FEELING that I’m asking, but its not easy. It takes courage. Only those who risk getting hurt, can truly love.
For twelve hours we hurt. We let the wounds bleed. And then, midday on Tisha Ba’av, we literally get up, and we begin to sew the stitches. We daven mincha (pray the afternoon prayer) with a sense that we have been to Hell and come back wiser. We watch videos or hear stories lectures about kindness and not judging and of ways to fix our world.

And though we’re too weak to go out and do, the words and the day penetrate our soft, open heart and then prepare us for the battle ahead. Beyond the words; the day itself, stokes that eternal flame in heart; that remembering flame.
The flame that unites us, the flame that stayed lit through exiles, inquisitions and pogroms. The flame that stayed lit through Communist Russia where we were sent to Siberia for learning Torah and Muslim Iran where Jewish boys were specifically recruited to the front lines at the age of 15 to be disposable pawns in a war between two dictators.
This flame has stayed lit through a Holocaust worse than any nightmare you could conjure and through rebirth in Israel where the price for wanting to come home was blood; ships of survivors sunk by the British because they didn’t want more Jews in the Jewish land.
It stays lit now. Where Israel, our idealistic, beautiful country has been forced to put on uniforms and send young men and women out to war to protect our basic right to live and love. It shines despite the injustice of being cast as a persecutor in a fight we don’t even want.
It stays lit as more and more people learn Torah and embrace their Jewish heritage. In fact, it is this Torah that fuels the flame. It creates light and heals the world, it creates energy and empowers us: emboldens us to make the world a better place.
And this is the battle we commit to as Tisha Ba’av winds to a close. To not only yearn for the Temple but to create a world where it exists once again. It’s the end of the day of mourning but the beginning of a whole new era.
We commit to forgiving one another. We commit to stop being petty. We commit to our Jewish Family. To love more deeply and to give more freely and to do everything in our power to create the kind of unity that will bring the Redemption we so badly crave.
Together with you this Tisha Ba’av,
Rivka Malka 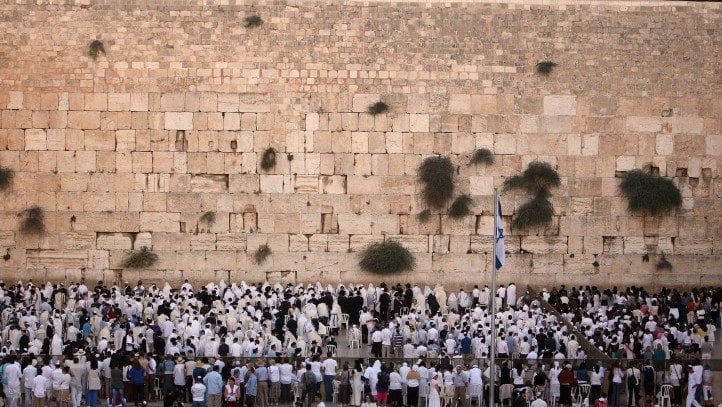