We’re walking down the many steps leading to the kosel. Around 20 students have signed up for Minyan Club. A Minyan is an official prayer service that has the participation of at lest ten men. 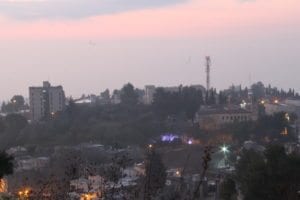 On the first day of the trip, Benzion challlenged us. He said, “You don’t even know how lucky you are to be in the Old City. You know how the Kosel, gives you  goose bumps you  when you’re there, how your feel so close to G-d? Well, you can have that every day!”

To join the Minyan club is to say, “I want to get the most I can out of this trip even if it means getting up a little early.”

You know, how you start your day makes all the difference. Starting out with the Kosel is like dipping in a mikva of love and having the droplets of Hashem’s presence with you all day.

There was a theme to the morning. Benzion woke the students up by singing in the hallways. I had told the students that I sing my kids awake in the morning, but this was the first time they  expereinced it.

We always wake up with song – Modeh Ani –    but I took it for granted. Said Courtney, “If I got woken up like this every morning, I’d be in such a better mood all day!”

Funny, how the its the little things affect us. Another girl, Stephanie,  asked to learn the morning blessings, and later on , at breakfast we learned one of the morning songs the children sing.

“Oh every morning, when I’m through sleeping

I open up my eyes and say

Thank you Hashem, for my Neshama (soul)

and for giving me a brand new day”

https://youtu.be/pr-o60tRrCo (this song is to  this tune – followed by this version of Modeh Ani)

It felt good. after all, here in Israel , and on this trip, we’re coming to Judasim with the freshness of youth – of a new perspective.

On our way down to the wall we saw little Jerusalem children going to school, the 5 year old walking the 3 year old, holding hands, comfortable with the contrast of their pink knapsacks against the slippery stone. The safety of children in the Old city is almost a given. They are in a haven of goodness, where alarm systems and locked school doors don’t exist.

We prayed, each at our own pace, and it struck me,, “I’m in a conversation.” There’s no such thing as the end of a prayer. Am I ever finished thanking G-d? Is there an end to the thing I need from Him? Leaving is just a breakfast, lunch and dinner break – I’ll be back tomorrow.

After a morning of thought-provoking classes it was time to go out. As we headed towards the tunnel that lead to our bus,we passed by a man and woman with a cart laden with food. From a glance, it seemed like they had a family celebration planned and they were bringing the food from the market.

This was an enormous task and it was probably the cheapest way that the could provide for the event. Many people here don’t have cars, they travel by bus and shop in their local mini market. Generally if someone would buy as much as they did, they would come home in a taxi.

But not today. Today they pushed the wagon, bumping up and down as it rolled over the worn stone. Bump! With one bump too many, the goods all went rolling, scattering in every direction.

In a blink, a flash mob of kindness erupted, and people from all directions came streaming to help him. As they picked up the juice bottles and rolls, we counted ELEVEN people who came to help them! That’s what I call The Holy Land Special. Where a stranger is just you, living a different life.

Our evening’s stop was at the Me’aras Hamachpaila; The place where Adam and Eve, Abraham, Sara, Issac and Rebecca, Jacob and Leah are buried.

It’s a funny thing here in Israel – you go to graves. We’re intimate with the dead. Especially our great ones. They live on in the wisdom they taught us and in the example that informs our daily life.

Going to a gravesite as an activity sounds morbid – but in fact its a festive, hopeful occasion! When we were in Tsfat there was live music playing at the top of the cemetery hill!

And that’s not at all unusual. When we were at the Tomb of Rachel, the wife of Akiva, there was snacks and nuts put out for us to enjoy. I wouldn’t say it’s a light atmosphere, but it’s a unifying, hopeful feeling being there.

Prayer has been a theme on this trip. Which isn’t to say that the students aren’t enjoying each others company and a good beer. Or that there isn’t singing, laughing, and joking.

But when I analyze it, it’s the times of prayer, with the morning start by the Wall, that have opened this up to be a hugely connecting experience.