Tomorrow is the 17th of Tammuz in the Jewish (lunar) calendar. If this day hasn’t been on your radar before, don’t feel bad. Today’s a great day to learn about it so you can enter tomorrow prepared. The 17th of Tammuz is a fast day that commemorates 5 tragedies that befell the Jewish people. I won’t go into them in detail you can look up the 17th of Tammuz for more in depth info. It can be hard to relate to Jewish holidays and fasts. In fact, the less you know, the more ridiculous they sound – the more you know – the more meaningful they become. So let’s just look at one of the tragedies – the one that started it all; the breaking of the Tablets (that held the Ten Commandments.) The Story After the Jews received the Torah on Mt Sinai – Moses ascended the mountain and promised that he would be back in 40 days. On the 40th day the people waited anxiously for him, but he didn’t appear. They didn’t know that he would return after 40 full days (not the 40th day.) They panicked, they despaired. 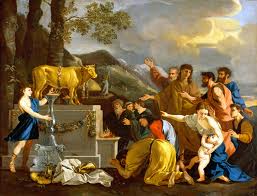 They thought, “After years of being slaves, we finally have a leader and now he’s taken from us!” At the advice of a few rebel rousers, they made a golden calf – a replacement leader – an idol that they worshiped with song and dance and celebration. Moses came down from the mountain carrying the Tablets. When he saw what was going on, he smashed the Tablets. And that horrible day was branded on our history forever. Since then, many tragedies have happened on the 17th of Tammuz. As a matter of fact it marks the beginning of the Three Weeks leading up to Tisha B’av, the saddest day on the Jewish calendar. What’s with the sadness?

Last night I was at a wedding. I danced for hours straight – the music was amazing. And I said to my friend who was there – “When I dance, I feel like I’m shaking off the sadness.” She put her arm around me and gave me a sympathetic look. I said, “It’s ok, nothing’s wrong, I’m not sadder than anyone else. It’s just part of life as we know it. The Neshama, our souls are in exile here. I dance it off and connect to something higher.” There’s an existential sadness – there’s a part of us, the spiritual part that can’t find comfort in this world. It’s displaced, it’s yearning; it’s trying to make sense of things that don’t make sense in a world that doesn’t make sense. There was a time when we got the Torah and it all made sense. We heard the voice of G-d , we knew our mission, it was clear as day and it DID make sense. No more slavery, no more wandering, just TRUST and being held by the knowledge that we were rescued, cared for and important. G-d whisked us out of Egypt and were were sworn to him forever. And then, in a matter of moments we lost it. A little uncertainty, a little confusion and it was as if we never had that clarity to begin with. Moses was “late” and we couldn’t handle it. We plunged headfirst into exile. Headfirst, into a world of make believe comfort – a piece of metal could replace a living breathing human being who sacrificed for us? A shiny hunk of junk could replace the glowing iridescent words of the holiness on the mountain? We acted like a child running from its mother’s arms and into the hands of a stranger for a piece of candy. That is really, really sad. And it’s never been quite the same. We still have the impulse to run. We run away from prayer, we run away from spiritual pursuits – they’re just not cool. A shiny calf – now that’s cool. Most of all we run away from intimacy.

While we called Moses “Our leader”, we weren’t really intimately connected with him. We still saw him as someone who was above us, someone who was pushing us to be better – someone who didn’t really get us. (Just look as the verses about how the Jews complained in the desert.) And when we thought he let us down for even less than a day – it all fell apart. We lost faith in him and betrayed him. How often do we do that? We’re in a relationship with a person and they show up late – and we judge them. Or even after ten years of friendship, when we hear that someone gossiped about us, we immediately get angry and write them off. Or how about when a sibling starts acting weird or an uncle refuses a loan? After years of so called relationship, we have the ability to get furious, disconnect and completely lose faith in them. That’s not intimacy. Intimacy in knowing that me and you are one and the same. We didn’t get to choose our life circumstance – we have all just arrived here and are doing our imperfect best. Intimacy is the deep knowledge that you and I are connected even if you disappoint me, even if you’re late coming down the mountain. I don’t stay in my little world of “I’m so mad” or “he just bugs me.” I join the circle of light that we’re all connected to – I stand there and I wait patiently. Under that light of connectedness, I may find something new there about you that helps me understand. Or maybe I’ll find out something about myself, that humbles me and lets my anger melt into self-awareness.

The Three Weeks are not simply about being sad – they’re about building relationships. The Temple that we mourn ( the focal point of Tisha Ba’v) was destroyed because people didn’t treat each other right –and it all started with the breaking of the Tablets. But we can fix this. We can bring our souls out of exile, our world back to order and our people back to unity. We try every day, but tomorrow is the day we start putting in extra effort. We can heal the world through love. WE CAN HEAL THE WORLD THOUGH LOVE. I invite you to join me over the next three weeks, I’ll be posting suggestions deeper intimacy and loving in our relationships. Take Care, Rivka Malka