Today I have three very different stories to tell you. One about my husband, one about my son and one about the neighbors.

In Orthodox jewish circles, it’s pretty common that when a boy goes into ninth grade, he doesn’t just go into high school, he starts Yeshiva. Yeshiva is a place where your whole day is dedicated towards learning Torah and spiritual growth.

They still learn math, english, science and social studies, only later in the afternoon. It’s a wonderful place – if it’s a good fit for your kid. The Rabbis develop warm and caring relationships with the boys and welcome them into their lives. And its a holy place, where Torah is learned with as much enthusiasm as the basketball game that comes after it.

There’s lots more to say on Yeshiva and if you’re curious, just ask, but actually this is just an introduction to an oddly large topic – A white shirt.

Now this is not a topic in every Orthodox circle. Especially in Israel, where everyone is more casual, you’ll find more color, but it is a topic in many places. In those institutions, wearing a white or light shirt and wearing dark pants is a the firm dress code.

It’s deeper than a dress code, really, because it’s not like you take it off when you go home. Being a yeshiva student is being a Yeshiva student, not just attending Yeshiva. And so, the white/black outfit becomes the symbol for your identity.

One of the benifits of  wearing black/white every day is that it frees the kids up from fashion and competition. Not unlike nuns or monks. Getting dressed no longer is a big deal, or even a deal at all. The other reason is to wear dignified, special clothes as befits a Torah scholar. Just like you’d want your lawyer to show up in a suit. It lends prestige.

It seems a strange thing that such a superficial expression has taken such strong hold. Nowhere is it written in the Torah “thou shalt wear black and white.”

And I think that  there’s a danger if we put too much attention on it. Focusing on things that are not absolute truth makes us lose our sense of balance and priorities. Parents can freak out if their kids change their dress a little and it can really turn them off from real spirituality. And conversely, kids can continue to look very religious hiding real questions of faith.

On the other hand, its a uniform, a statement of identity. It’s an expression of comittment and seriousness about Torah.

I find it fascinating how it evokes such reactions in people, including myself,

“Oh, I just love those fine yeshiva bochurim! They came and shoveled my snow in those white shirts of theirs!”

Or, “Why must they always wear black and white? Don’t they ever think for themselves?”

I offer you these stories here as a mini montage and to shed a little light on the topic.

Something to think about.

Once upon a time, my husband, Bezalel was a Yeshiva bochur (yiddish for guy). He went first to Yehiva in Baltimore and post high school, he went to Israel for a few more years of study. All that time he wore dark dress pants and a light, (though not always white) shirt. When he went to another Yeshiva, an institute of even more intense study, he began, by the advice of his Rabbi, to wear a white shirt every day.

Years passed, we got married, lived in Israel for 4 1/2 years, came back to America and one day my husband shook his head.”Why do I still wear a white shirt? I’m not a yeshiva guy anymore and I like color.

It seems like a simple thing, but it wasn’t. It turns out that though he felt grateful for his years of intense learning, he was disappointed that he was not led to a specific profession and he felt like the system let him down. (although he did get a degree from his years in Yeshiva.)

He no longer identified as a Yeshiva guy. He established for himself what he felt was a healthier identity (for him) a Ben Torah. Someone who strives every day to live a Torah life and who is honest, upright and kind.

Off came the white shirts, and on went a new era. An era where he would take everything he learned and synthesize it so that it could work in the world outside of Yeshiva walls and for his personality. I can’t even begin to describe to you what that first shopping trip was like. Or the first time he appeared at the breakfast table in his checkered shirt. He was breaking new ground. He could have come to this place independent of a wardrobe change. He could have kept on the white shirt, as many do, and that would have been fine for some. But not for him.

Now he dresses like a Ben Torah, a person of dignity. You’ll find him in jeans if he’s working in the yard or on a family trip, but otherwise, he’s polished and pressed every day.

The above story is an abbreviation of a deep struggle and process and finding your truth in an imperfect world. And the shirt was the symbol. 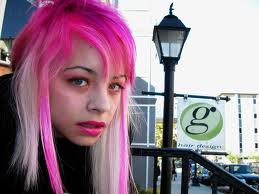 A little while ago, a car pulled up in front of my house. Four teenagers got out. She, with a colorful wig, he with long hair, and 2 more in jeans and torn tank tops. The wigged girl began kissing the guy and the other guy pulled out a cigarette.

My kids called me over and I went to say hi to them. After we said hello etc. I welcomed them and told them that my kids were around and if they could not do the kissing right by my yard that would be better. They understood.  Then we brought them out a mini dinner of meatballs and some cold drinks.

These kids were Jewish kids who grew up in religious homes and for various reasons left observance. I felt that their hanging out in such a central location was a subconscious test. “Will people judge us and be horrible to us and give us a further reason to leave Judasim?”

Their torn jeans and mini skirt  were a way of saying something much deeper. “I don’t subscribe to that system anymore. This is who I am.” Some of these boys had most likely worn white/black at some point in their lives. I don’t think this is actually who they are but they’re struggling trying to figure it out. And there’s a good chance that somewhere along their journey, if they go back to school,  clean up their act, and get inspired, they’ll make dress choices that are different.

The above story is an abbreviation of a deep struggle and process and finding your truth in an imperfect world. And the clothes were the symbol.

My son, Mortzy,  is a gymnast and an athlete. He took karate for years. He does push ups and chins ups for fun. He organizes hiking trips and camping  overnights. He breakdances.This boy does not wear dress pants!

Even regular clothes have never  really worked for him. We bought  him cotton pants for school but what he really wanted to wear was nylon shorts.

It was just a a few days ago when we went shopping for Yeshiva. The student handbook outlined what he needed and he had exactly nothing from the list in his wardrobe.

When I showed up at the store, owned by a religious guy, and he starts pulling out pants from the rack, I stared at him incredulously. “What? This is what they wear? No way! How can he play basket ball in those? He’s totally active?! And the shirts! Don’t you have any more with color on them?”

Mortzy told the owner,” I really don’t want to wear white shirts every day. Can you please give me some with designs on them?”

We left the store, buying black pants, white shirts, black  shoes and bringing new meaning to the term fancy pants. I thought it was ridiculous.

Then he tried it on. Black pants, white shirt. Neat and crisp. Black socks and shoes, elegant and dressed. At first I was confused, but there was no denying it. He felt great. The kid stood taller!

It’s been a few days and he’s completely transformed. He’s reached a new level of maturity and responsibility.

That night I picked him up from school and I watched all the boys streaming from the building. Almost every one of them in their dress clothes and I saw before me a generation of gentlemen; Boys who spend their days looking at holy books instead of looking at girls (yes, that’s universal!) and kids who are taught that their holding the torch of Judaism is not a casual thing.

So what does it all mean? Are white shirts just another way to conform? I know grown men, not in Yeshiva (many thousands) who only wear white shirts. They’re not conforming –  to them it says.”Torah study is my priority.”

And I know guys who grew in observance, like the guys in the video and for them, the white shirt is a badge of honor. It’s something they arrive at that’s a new self-definition.

On the other hand it’s just a shirt, you don’t get a first class ticket to Heaven for wearing it.

It’s a little thing, a white shirt, but like I said, an oddly huge topic. 3 stories, what do you think?

PS video posted above because those Yeshiva guys dance like my son in his white shirt!