I haven’t posted in so long and I have so much to catch you up on. It’s amazing how much life goes on in three  weeks.

There was so much I was going to write about that’s just flown by!

Like,the three little kittens were born on our porch this week. And how my daughter has been saying that our cat is pregnant for 2 months and I thought it was just fantasy!

And about this book I read (part of) where this girl has a gift/curse that she can taste the feelings of whoever cooked the food.   How she never sees her mother the same way after eating  a slice of lemon cake at her ninth birthday. And how I’ve been thinking about all the creepy things that can be served up, and who we are on the inside.

I was going to write all about that, but I was busy making dinner!

And I wanted to tell you about my family get together, and all the growth in relationships.

How most of us are in our forties and how we’ve collectively chilled out over time. And how nice that is.

The last time we were together (5 years ago) it was amazing, but it was intense. Our families have grown  bigger, our responsibilities even more, and we’re just happy to be together. We’re  tired! (pic is my mother and oldest sister, Devora)

How it was just my birthday and  this is The Year of The Sister.

Where I realize that I’m missing out so much by not being in better touch with them and I do something about it.  (pic is with my sister in law and my sister and my niece)

And more.  How I woke up a few weeks ago after sleeping through most of this year. How I’ve been out of tune with my values and gotten way off track. How I over did it and had a  G-d complex and never asked Him if He thought it was good for me . I just kept doing.

How I put work first and relationships second.

How that clarity led me to the office, where I said, ” ‘m losing myself, I’m not the person you hired me to be anymore. I’m not fun, I’m not chilled, I’m not there for my family. I need to do less.” And how much courage that took and how much faith I needed.

And how the Rabbi I work with said “Awesome! You’re absolutely right.” And what that meant to me.

And only a day later I was hiking with my kids in Double Rock Creek and watching them catch frogs and swim.

And the day after that, when I realized at 12 that I had no meetings; How we went camping, even though we had to leave early the next day. And how I danced in the night with the freedom of making choices that are true to me.

And that 2 am test of motherhood when a racoon was nibbling on graham crackers right by my head, and I knew my son was scared but  I was too scared to move or even open my eyes! (Don’t laugh! In the dead of night, on the ground without a tent, it might as well have been a wolf!)

How I learned a lesson about being thorough from the kid who packed 7 blankets for 9 of us.

Sometimes good enough is just not good enough. Not to mention the kid who left the tent poles at home! Brrrr.

I really need to tell you about this one little comment someone made to me about my posts being too heavy (as in dark, weighty, depressive)  I chewed that one over.

Spending most of this year in conflict, being imbalanced with my work/relationships priorities, my head has been in constant turmoil.

So this is also The Year of Lightness; Where joy becomes my comfort zone! 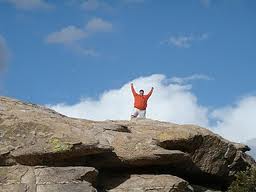 But what I really want to share, and this I will post more about is hisbodidus and how it’s everything to me. I want to yell it from the mountains and whisper it in your ear. I want to teach it in the morning and practice it by day.

It’s only a week after my birthday and the year ahead is bursting with possibilities because this is also The Year of  HIsbodidus.

Don’t worry if you don;t know what  hisbodidus , you will by the time I’m done!

Alright! We’re just about all caught up! your turn; How’ve you been?