Here in Baltimore we are living under the the ghost of Freddy Gray.

The riots came right into our neighborhood, though thank G-d not with the same force as the riots downtown. The streets were quiet. I rushed out to get milk this morning and the store I went to was moving with a hurried, hushed whisper. People just wanted to get home.

Back in our house, the kids were alternately relaxed and stir crazy. It seemed a little over the top but we were scare to let them out of the house at all. I wan’t quite prepared for everyone to be home. I didn’t plan activities or anything. It was kind of shocking to be under house arrest like this knowing that mayhem was not far away.   So we stayed inside. We watched National Treasure. We cleaned up a little and we ate deli sandwiches for dinner.

While we were at home today some of our friends braved the streets to support the policemen through this harrowing day. I’m so inspired by them – they looked for the light in the darkness. 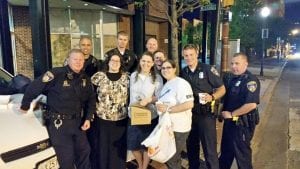 Bringing donuts and coffee to the police! 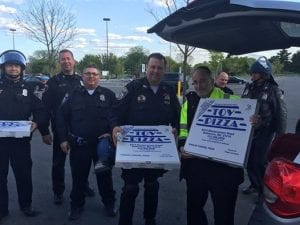 Bringing Pizza to the Police!

The Torah says that if a person hears that something bad happened and he doesn’t take action to improve himself, he is considered cruel. Why? Because G-d was sending a message to us. If we ignore it, He will need to send it louder and bring more calamities to wake us up. For each person it’s different.

I asked my kids what their take away was – this is what they said:

– When people are doing something, don’t just join in because it’s fun. You have to think to yourself, is this a good idea? (12)

– The world would be a better place if people would not act dumb. We need love, passionate love. (9)

– Look at what an effect one man’s life has had on a community. If this is the effect that can come for destruction, imagine the effect of the goodness that can be spread through one person’s life as well.  (18)

I leave you with these little pearls and I would love to hear yours. In a way I’m  just speechless with horror.

[reminder] What is your take away action from the Freddy Gray riots?[/reminder]